A beautiful tale to capture audience hearts is coming to Medway between 5th – 8th July. 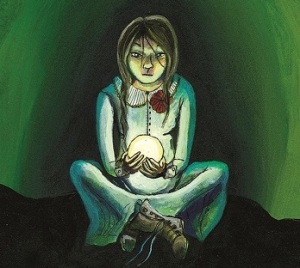 Critically acclaimed Sparkle and Dark’s Travelling Players are delighted to present the première of their new show The Girl with no Heart, playing at The Brook Theatre, Chatham, where they are a resident company.

Inspired by the tragic events of the Hiroshima and Nagasaki atomic bombings that occurred during WWII, the show highlights the fragility and frustration of children surrounded by a war they cannot control.

From award-winning, Gillingham-born writer Louisa Ashton, this new stark yet beautiful tale will be brought to life with the company’s unique brand of highly visual puppetry and shadow, live music and poetic storytelling.

Delicate, intense, provocative and haunting, The Girl with no Heart takes the audience on an epic journey into a paper world of forgotten wishes, a world where a child’s heart has the power for immeasurable good or unimaginable destruction.

Sparkle and Dark’s critically acclaimed direction and design interlace elements of Japanese culture into the show with sets made entirely of paper, Shamisen-inspired music and specially designed life size puppets which attempt to blur the lines between puppet and puppeteer.

The company is committed to bringing their daring style of performance to Medway since becoming the newest resident company at The Brook Theatre in 2011.

Verne Sanderson, Head of Operations at The Brook Theatre, is equally excited to be working with Sparkle and Dark. He said: “As a young, forward thinking company I was very pleased to welcome them to the Chatham area in August 2011 where I know they will make a significant artistic impact.”

The Medway community has already leant a helping hand in developing Sparkle and Dark’s second full-length show. A work-in-progress version of The Girl with no Heart was performed in September 2011 and the audience was invited to discuss their thoughts afterwards. What resulted was an engaging, thought provoking feedback session, which the company hopes to repeat in July. After the premier in Medway, The Girl with no Heart will then run at the Bedlam Theatre as part of the world famous Edinburgh Festival Fringe 2012.

Sparkle and Dark are also looking forward to running puppetry workshops and demonstrations with Japanese Bunraku style puppets at The Will Adams Festival in Gillingham later this year. The company are particularly excited to be able to contribute to the community’s historical links with Japan and they are hoping to eventually take the show there in the next two years.

Founded in 2009 S&D have gone from strength to strength, gaining five star reviews, fantastic audience quotes and awards for their first production  – The Clock Master, which ran on a 22 date national tour in 2011.

The Clock Master took them to a wide range of famous venues and festivals including The Roundhouse, The Lowry and the V&A Museum of Childhood.