Medway’s creative community had a ‘Wow’ of a night earlier this month, as we moseyed on up to the Corn Exchange in Rochester for the Medway Culture and Design Awards.

With a key note speech made by Martin Green, Head of Ceremonies for the London Olympics, we were in exalted company: he’s the man who put together the wondrous team which produced the opening and closing ceremonies and the torch relays and re-affirmed Britain’s place on the sporting and cultural map of the world. 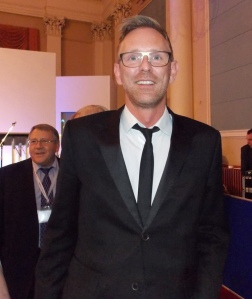 The whole evening was underpinned by the first winner announced being our very own Creative Producer, Emma Dewhurst. WOW Magazine won the media award, in an extremely tough category which included violaFilms and Medway Eyes, not to mention coFWD, the coworking space we’re associated with. 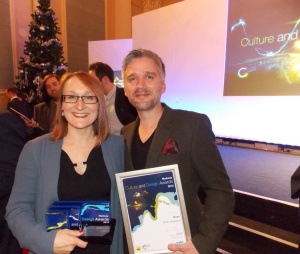 Emma said: “Winning a Medway Culture & Design Award means the world to me.  After two years’ working on my beloved WOW magazine, it is a huge vote of encouragement to keep going – WOW is a tiny micro business and it is not easy to keep my head above water even now.  The Award is a wonderful boost, both to my confidence and as a thank you to all the amazing contributors who have so generously given of their time and talents to make WOW what it is.  It is brilliant to be able to hit the ground running in 2013!  Thank you, from the bottom of my heart, to everyone who has helped WOW survive along the way.”

More success followed, as Bill Lewis was named the winner of the Literature Award, recognition at last for a fantastic ambassador of Medway. Bill said:  “I did not expect to win especially when I saw that Billy Childish was also shortlisted for the Literature Award. I decided to just enjoy the meal and the company. I met some very nice people at our table who were shortlisted for building a School. I was so pleased as I watched many of the best creatives in Medway win their awards, all of them good people with their hearts and minds in the right place. Then as the winner of the Literature Award was described I thought, hang on, that’s not Billy, that’s me! It was nice, after 35 years to get a little official recognition.”

Highly commended in the Literature category were our good friends, ME4 Writers. The writing collective set up four years ago by Sam Hall was praised for having achieved so much in such a short space of time. 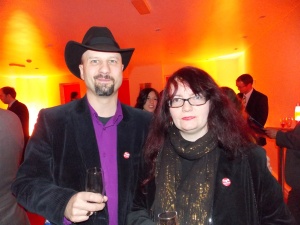 Barry Fentiman and Sam Hall of ME4 Writers

Sam said: “We’re delighted to be Highly Commended in the Medway Culture and Design awards! Congratulations to all the other nominees and winners – Medway’s on the boil! And big thanks to everyone who has got involved with ME4 these past few years!”

Sarah Jenkin, Medway Community Librarian who is also part of ME4, was keen to expand on the recent ‘Letters Home’ collaboration between the libraries and the group. “When Sam approached me about this event, I knew libraries had to be involved. For so many, their definitions of home and identity and culture are not acknowledged, erased from history. Other people write their stories for them, defining their identities for their children.

I wanted there to be a place for people to experience, describe and explore their ideas of home and identity in their own words and with their own language, without censorship. I want their voices to be recognised and shared with others.”

The next event from us at the Rochester Literature Festival will also be in collaboration with Sarah and Strood library – watch for details soon, or sign up to our newsletter here and we’ll let you know personally 🙂

One thought on “Recognition for WOW, Bill Lewis and ME4 Writers at the Medway Culture and Design Awards”