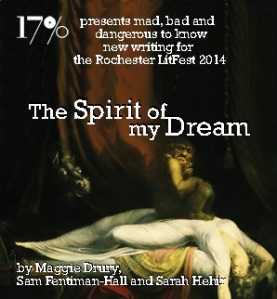 17Percent presents an evening of new plays for the Rochester Literature Festival.

‘Sleep hath its own world…’

Inspired by Byron’s poem ‘The Dream’, three of Medway’s most exciting playwrights, Maggie Drury, Sam Fentiman-Hall and Sarah Hehir, have collaborated to create an evening of new plays with a somewhat fantastical theme.

“People think dreams aren’t real just because they aren’t made of matter, of particles. Dreams are real. But they are made of viewpoints, of images, of memories and puns and lost hopes.” – Neil Gaiman

Maggie Drury started writing for the stage in 2004 showcasing work at The Old Red Lion and RADA. Her play NOT KNOWING WHO WE ARE was performed at the Blue Elephant Theatre in 2007. Several of Maggie’s short plays have been showcased by 17Percent, including at MAID IN KENT at Lounge on the Farm 2012. She is currently working on a novel and a full-length play.

Sam Hall / writing Mad
Sam is the founder of 17Percent. Her first play, written whilst at school, won the Six Counties Festival. Her plays have been performed in the UK and internationally; her most recent play, SEVEN TUNES ON THE FLUTE received its world premiere in Italy at the Trends festival of new British Writing, in April 2013. She has been commissioned to write a suite of plays on human trafficking for tour next year.

Sarah Hehir / writing Bad
Sarah teaches English, Drama and Creative Writing in schools and prisons. She was shortlisted for The Nick Darke award 2012 and is the winner of The 2013 Writer’s Prize sponsored by the BBC Writersroom. Her play BANG UP was broadcast on Radio Four on 8 August 2013. DARK was shortlisted for the Immersive Writing Competition July 2013. She is currently developing a full-length stage play, CHILD Z.

17Percent is an organisation to support female playwrights, and presented the popular ‘What’s through the door?’ at last year’s LitFest. 17Percent.wordpress.com

“I thought the quality of the overall writing was very good and very entertaining – and the acting was outstanding.”

“This is a very well‐crafted show that cleverly integrates three stand-alone short pieces with one talented small cast and a super narrative. An entertaining and thought provoking evening. 4 stars.” Everything Theatre

One thought on “A Night at the Theatre: The Spirit of My Dream”