Christina casts her creative eye over our programme for the upcoming Dickens Festival weekend. 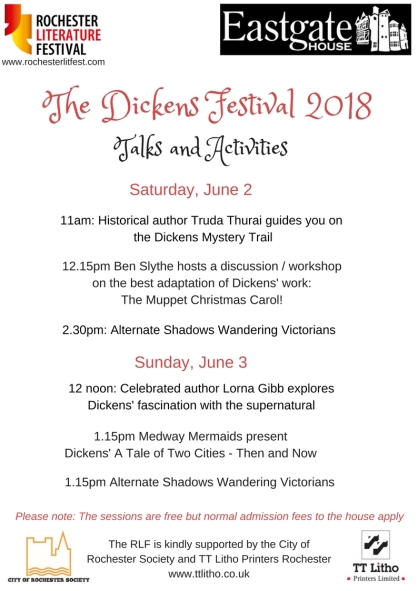 The RLF is back this summer’s Dickens Festival weekend with another fantastic programme with performances from some brilliant authors and performers. This year we will be based at the beautiful, newly refurbished Eastgate House (Dickens’ once referred to it as ‘The Nuns’ House’ in The Mystery of Edwin Drood) which now accommodates exhibitions dedicated to the history of the house.

Truda Thurai is the author of two books, blogger, journalist and historian based in Ashford. After graduating from University College London and King’s College London with a BA and MA in Medieval History, Truda worked as a journalist and lawyer for ten years before turning to fiction. Her first book, The Devil Dancers (2011), is an epic historical fiction set in mid-1950s newly independent Ceylon with a mix of romance, mystery, political intrigue. Her second book, Barley Bread and Cheese (2013) is a collection of short stories inspired by Rochester and its rich history. It includes ‘Jack’, an imaginative exploration of the famous Green Man that lurks in the nooks and crannies of the cathedral; ‘The Baker’s Boy’ is about the life of Rochester Cathedral’s medieval patron Saint William of Perth; and ‘The Cinnamon Peeler’s Daughter’, a creative continuation of Dicken’s unfinished Edwin Drood that links Rochester to Ceylon. Truda will be taking us on a verbal Dickens Mystery Trail around Rochester to explore the city’s connections with Dickens’ life and work.

Ben Slythe is a writer and storyteller from Faversham, with years of experience in creative writing and storytelling. Ben is part of The Lacuna Works, a non-profit group that offers publicity training for charities and educational organisations; and Yellow Plank, his associated publishing label. He is incredibly versatile and excels in many genres, from military science-fiction, his current book series, to detective fiction, screenwriting, and Anglo-Saxon tales. He has recently published Soldier of the Republic, the first part of a trilogy about wars and the struggles of a rebel warrior in a futuristic Republic state. His upcoming second trilogy, Terminus Place, is a detective series set in London filled with puzzles and clues for readers to solve along the way. Ben previously took part in Rochester Literature Festival’s Café Crawl in 2015 and Creative Writing Workshop in 2016. This year he’ll be giving a workshop on everyone’s favourite screen adaptation of Dickens’ novels, The Muppets Christmas Carol.

Alternate Shadows are a non-profit amateur dramatic group based in Medway Towns. Formed in 1996, Alternate Shadows have won multiple awards at the Duncan Rand One Act Festivals and Southern Counties Drama Festivals. They perform both within Medway and beyond at drama festivals, pantomines, cabaret evenings, and Murder Mysteries to raise funds for schools, care homes, and local organisations. They have appeared in previous Dickens Festivalsl and Rochester Literature Festival’s Turtle Moves as Terry Pratchett’s Discworld beloved characters. They will be haunting Eastgate House on both days as Wandering Victorians

Dr. Lorna Gibb is a Senior lecturer in Media and Creative Writing at Middlesex University London and author of a number of non-fiction and fiction books, including the biographies of Lady Hester Stanhope and Dame Rebecca West. Lorna previously worked as a dancer before going to university. She completed her BA at University College London and her PhD at Edinburgh University, and lectured at the University of Qatar, Birbeck College, London, Sheffield and Essex University. Alongside her academic writings, Lorna publishes articles, short pieces, and presents at literature festivals. She won the Granta Memoir prize in 2014 for her wonderful essay Two Gardens on her childhood living in Belshill, North Lanarkshire. Her first novel, A Ghost’s Story was published in 2015 and she is currently working on a novel on childlessness called Childless Voices to be published in 2019. Lorna will be talking about her work and and exploring Dickens’ fascination with the supernatural.

Medway Mermaids is a local creative writing group for women of all ages and backgrounds, from beginners to experienced authors, who share a common love of literature and creative writing. The Mermaids provides a safe and supportive environment where women are encouraged to develop and nurture their creative writing skills with the guidance of fellow writers.

Several members are published authors, including Lin Tidy, who published her novel The Warrior on the Wall in 2013 and her anthology The Unsent Letter in 2014; Susan Pope, who released her historical fiction Spirit of the Jaguar (2017) following Bedtime Stories for Grown-Ups (2013) and Lighter Than Air (2008); and Ann Smith, who recently made her debut with crime romance Criminal Love earlier this year. The Mermaids will be reading creative re-tellings of Dicken’s A Tale of Two Cities and new ‘tales’ inspired by the novel.

We’re incredibly grateful to City of Rochester Society and TT Litho Printers Rochester for their generosity and continued support; to the authors and performers attending the festival; and of course the wonderful volunteers and general public who make our events successful. We look forward to seeing you!